Prospector and Friends
Burros were the constant companions to the old prospectors of the west.  This trio entertain the visitors at Jerome, Arizona, America's largest Ghost City.


Jerome, Arizona
Rapidly becoming one of Arizona's ghost towns, Jerome, of Copper mining fame, is slowly sliding down the mountainside which is honeycombed with mines.  In the distance the red walls of Oak Creek Canyon and bejond to snowcaped San Francisco Peaks 50 miles away.


Ghost House - Jerome, Ariz.
When the mines closed the people left their homes and Jerome, so did Manuel Ariaga.
Posted by Brian at 4:00 AM No comments:

Ballroom Garden Governor's Palace
the garden beyond the Ballroom of the Governor's Palace typifies the formality of English design.  Here are found elaborate geometrical parterres, framed with clipped hedges and accented with topiary work.  Standing watch over the garden are twelve massive box trees, the "twelve apostles" often found on English estates of the period.  Open daily.


Supper Room Governor's Palace
Lighting the candles in the Supper Room of the Governor's Palace where eighteenth century guest refreshed themselves after an evening of dancing in the Ballroom.  The Chinese hand-painted rice paper on the wall, and the pagoda-like form over the door show how China and India influence the taste of the day.  Open daily.


Robertson's Windmill, Williamsburg, Virginia
This windmill is known as a post mill because the whole superstructure revolves around a single huge post of timber.  Today an operating Craft Shop open to the public, Robertson's Windmill once again offers to its patrons the finest meal ground in Virginia.
Posted by Brian at 4:00 AM No comments:

Historic Wills House, Gettysburg, PA.
Home of Judge David Wills, where Lincoln stayed as his guest and wrote the immortal Gettysburg Address.  The bedroom where he wrote the Address has been preserved to this day with all the actual furnishings.


General Meade's Headquarters
Gettysburg, Pa.
It was at this farmhouse, directly on the Battlefield, that General George Gordon Meade and his staff established themselves to direct the Union activities for the valiant fighting at Gettysburg.  Situated in the background is a view of the National Park Service Visitors Center and Cyclorama Building.


Jennie Wade House and Monument
Gettysburg, PA.
Jennie Wade was the only citizen of the town of Gettysburg who was killed during the three days fighting there.  While attending to household duties at her home she was killed by a bullet on the morning of July 3rd, 1863.  The monument, marking her last resting place is in the Citizens Cemetery, nearby.  The house is now used as a museum and contains many marks of the great conflict.
Posted by Brian at 4:00 AM No comments: 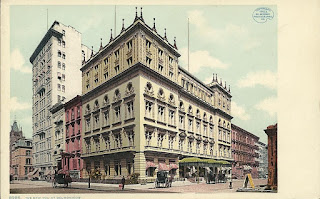 We Saw You At Delmonico's 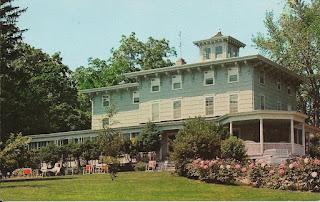 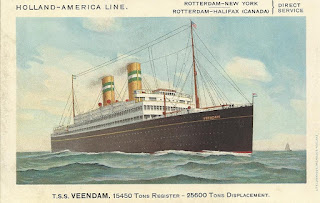 The Way of the Willows
Indian Lake, Ohio


The Bridge to Orchard Island at Indian Lake, Ohio 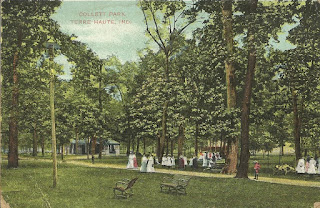 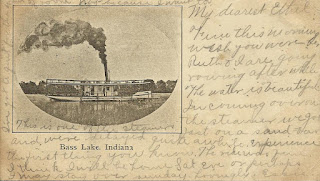 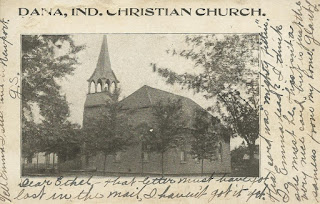 Dana, Ind.  Christian Church
Posted by Brian at 4:00 AM No comments: