An antique PEERLESS Steam Tractor passing in revue at the annual outing of the ROUGH & TUMBLE ENGINEERS at Kinzers, Penna.
These antique monsters of Yesterday are the forerunners of today's modern farm tractors.
Posted by Brian at 4:32 AM 1 comment:

At Valley High
R.F.D. 3, Bellefontaine, Ohio
Ski Lifts To Everywhere!
Take your choice:  from a 500 ft. beginners tow to the intermediate 1200 ft., and by double chair lift to the 2000 ft. crest, overlooking a view of the highest point between Rocky and Appalachian Mountain Chain.  Complete ski shop!!  Plus:  Royce Asher's Ski School.
Take U.S. Rt. 33 from Bellefontaine to County Rt. 5 at Zanesfield to the resort.
Famous Lollipop Tree in Glass House Restaurants (1961)
Bellefontaine Municipal Swimming Pool
Bellefontaine, Ohio
Posted by Brian at 5:42 AM 1 comment:

Bird's-Eye View of Corbin, Ky.
Chamber of Commerce - Corbin, Kentucky
Corbin is known as the hub of the valley of parks.  Nearby are Cumberland Falls, Lake Cumberland and Levi Jackson Wilderness Road State Parks.
Posted by Brian at 4:30 AM 2 comments:

The Statue of Captain John Smith
Jamestown, Virginia
Captain John Smith was the dominant personality at Jamestown.  Through his leadership he kept the colony together during the first two and one-half years.  In the background can be seen the Old Church Tower.
Jamestown Island, Virginia
Captain John Smith, Governor of Virginia, 1608 and view of James River.  In rear, eastern end of Colonial Fort.
A striking bronze figure of Captain John Smith overlooking the famous and historical James River at Jamestown, Virginia.  Captain Smith was Governor of Virginia in the year 1608.
Visitors on the "Susan Constant II"
Jamestown, Virginia
Although it looks large here, the "Susan Constant II" is, in reality, only 111 feet long.  This unique replica of one of the ships which brought colonists to Jamestown in 1607 can be seen and boarded today in Jamestown's Festival Park near Williamsburg, Virginia.  The original vessel, along with here smaller sisters, the "Discovery" and the "Godspeed," sailed the ocean for five tortuous months to bring to Virginia the first permanent English settlers in America.
Posted by Brian at 4:22 AM 3 comments: 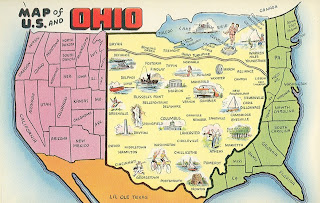 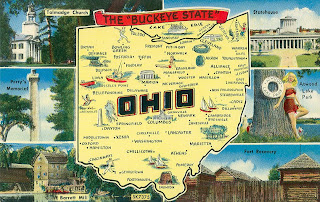 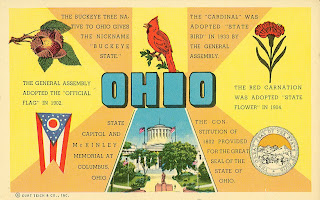 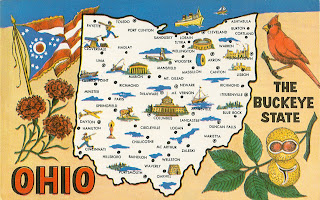 Penn-Stroud Hotel . . . In the Beautiful Pocono Mountains . . . Stroudsburg, Penna.
Posted by Brian at 4:14 AM No comments:

Cocoanut Palm Avenue in Beautiful Florida
It's Great to be in Miami!
Posted by Brian at 5:47 AM No comments:

Sheraton-Brock Hotel
1685 Falls Street, Niagara Falls, Ontario
The only hotel with an unobstructed view of both the Canadian and American Falls.  300 Rooms.  Free TV and Radio.  Air-Conditioning.  Home of the glass-enclosed Rainbow Dining Room and Terrace Room - each with its own unsurpassed view of the Falls.
View in Oakes Garden Theatre, Niagara Falls, Canada.
Posted by Brian at 4:08 AM No comments:

Lindley Hall, a girls' dormitory housing 200 girls.  Built in 1917.  New wing completed in 1940.  Named for first President of Ohio University, Jacob Lindley.
It was near this point in the Great Hock-Hocking River, theat early pioneers landed and located the site of Athens and Ohio University.
The University Library, named in honor of a recent dean of the College of Arts and Sciences, has a capacity of 250,000 volumes.
Posted by Brian at 5:27 AM No comments:

The Tercentenary Monument
Jamestown, Virginia
It was erected in 1907 in recognition of the 300th anniversary of the Founding of Jamestown.  It is constructed of New Hampshire Granite.
Jamestown, Va.
Godspeed and Discovery
Here on My 13, 1607, after a wintry Atlantic Crossing, the Susan Constant - Godspeed and Discovery - dropped anchor.  Here the band of 103 Colonists founded Jamestown, Virginia - first permanent English Settlement of the new world.
A full size replica of the 20 ton Discovery.  One of the 17th Century vessels to be seen at the Jamestown Festival.
Posted by Brian at 4:00 AM 2 comments:

Daytona Beach, Florida
Aerial View of Daytona Beach, Florida, showing the five bridges crossing the Halifax River, connecting the Mainland to the Peninsula and the World's Most Famous Beach on the Atlantic Ocean.  From top to bottom are the Ormond Rockefeller Memorial Bridge, The Seabreeze Bridge, the new Main Street Bridge, the Broadway Carlton-Blanke Bridge, and the South (Memorial) Bridge.  Also shown, in the foreground are the Municipal Yacht Basin, City Island, and the city of Daytona Beach, with the cities of Holly Hill and Ormond Beach blending into the background.
Daytona Beach, Fla.
It is a beautiful sight to watch the sun rise from the Ocean.  It moves faster than you think.  The horizon is a line to judge by.
Posted by Brian at 3:54 AM No comments: 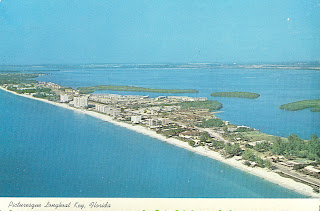 Aerial view of Longboat Key with its miles of beautiful snow white beaches on the Gulf of Mexico between Bradenton and Sarasota, Florida. 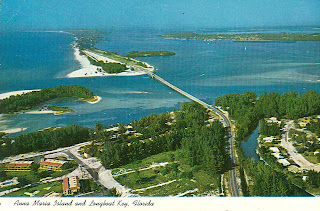 Aerial view of the picturesque bridge connecting Anna Maria Island to Longboat Key on Florida's beautiful Gulf Coast.
Posted by Brian at 5:39 AM No comments:

Beautiful Biscayne Boulevard
A famous thoroughfare in Miami, Florida
Aerial View of Hialeah Race Course, Miami, Fla.
The Port of Miami, Fla.
It is a most exciting attaction at Musa Isle, to watch the Seminole Indians capturing and wrestling live alligators.
Posted by Brian at 5:43 AM No comments: