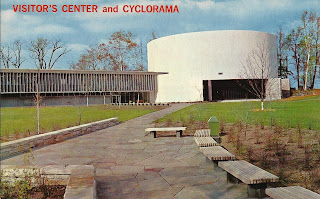 Located near the site of Pickett's Charge at Gettysburg is this beautiful building which houses the famous painting of the Battle of Gettysburg.  Operated by the U.S. Department of the Interior, it is one of the highlights of a visit to Gettysburg.
(Note:  the painting is now housed in a new building and this fabulous Richard Neutra designed modern masterpiece sits vacant with an unclear future.) 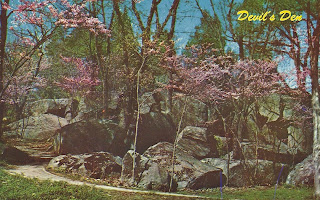 Devil's Den Ledge
Gettysburg, Pa.
Showing the Red Bud (Judas) in bloom.  One of the natural landmarks that attract attention of tourists is the immense ledge of rocks in front of Round Top.  It furnished shelter for the Confederate Sharpshooters who were picking off the gunners at the Batteries on Little Round Top. 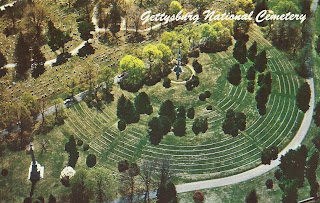 The National Cemetery, Gettysburg, Pa.
This aerial view clearly shows the rows of markers for both the known and unknown Northern dead who were interned here.  The known dead total 3,555 and are buried in eighteen different groups, each state having its own individual section.  The New York State Monument is in the foreground and in the rear and center stands the National Monument which is near the spot wehre Lincoln delivered his immortal speech of dedication and is the nation's tribute to her sons who gave their lives as the price of victory on the field at Gettysburg.
Posted by Brian at 4:30 AM