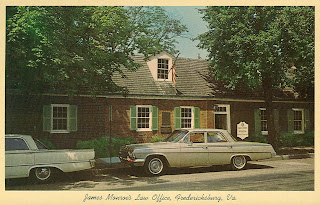 James Monroe’s Law Office
Fredericksburg, Virginia
James Monroe practiced law in this office in Fredericksburg. The office was opened in 1786 before he received his first political appointment. James Monroe was the fifth President of the United States (1817-1825), and was the author of the “Monroe Doctrine.” 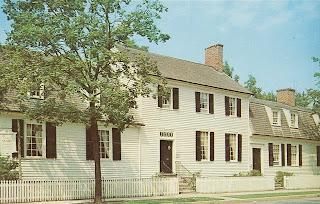 Home of Mary Washington
Charles at Lewis Sts.
Fredericksburg, Virginia
Washington bought this house and remodeled it for his mother in 1772, she lived here until her death in 1789. Many famous persons were entertained here such as, Thomas Jefferson, John Marshall, Lafayette, George Mason and many other notables. 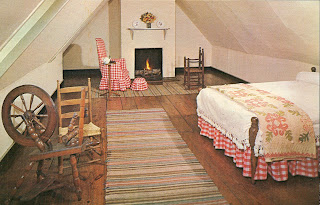 Spare Bedroom, Mary Washington House
Fredericksburg, Va. (1771-1789)
The last and only remaining home of Mary Ball Washington, Mother of George Washington. Owned by the Association for the Preservation of Virginia Antiquities. Open daily to the public.
Posted by Brian at 4:49 AM