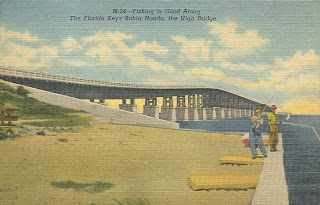 The Overseas Highway to Key West, Fla. the southernmost city in the U.S. is one of the greatest engineering wonders in the world.  Crossing Bahia Honda bridge is the most spectacular part on this great highway, where the road rises 70 ft. above the meeting of the Atlantic Ocean and the Gulf of Mexico. 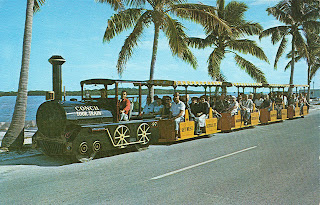 Passenger Conch Tour Train, Key West, Florida
Operates conducted lecture tours daily on the historic Island City.  The train passes more than 60 points of interest, running from the Atlantic Ocean to the Gulf of Mexico.  Key West is the nation's southernmost city and the only town in the U.S.A. that has never had a frost in the history of the Weather Bureau. 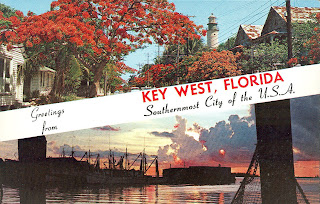 Beautiful Royal Poinciana Trees lined along the streets and Picturesque Shrimp Boats nestling snugly in the harbor are contrasting but typical scenes in key West, Florida.
Posted by Brian at 4:59 AM