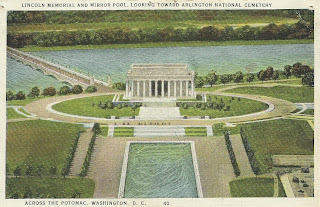 Lincoln Memorial, Washington, D.C.
Design adopted by the Lincoln Memorial Commission on the site of Potomac Park, near the river on the axis of the Capitol and the Washington Monument.  Design by Mr. Henry Bacon.  It is a monumental structure, standing in a broad plain, surrounded by an amphitheatre of hills.  Statue of Lincoln is in the center of Memorial, while smaller halls at each side of central space contain second Inaugural and Gettysburg Addresses.  Surrounding the walls, incasing these memorials, is a colonnade of 36 columns for each of the 36 states in the Union at the time of Lincoln's death. 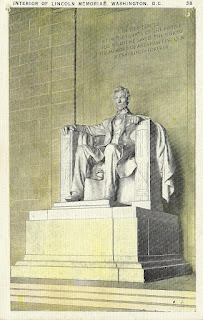