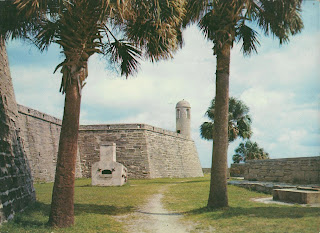 Castillo de San Marcos, St. Augustine, Florida:  Oldest Fort standing in the U.S. was proclaimed a National Monument in 1924.  The construction began in 1672 and was completed in 1756.  The picture shows in middle ground the hot shot oven where cannon balls were heated red before firing, in order to set fire to enemy ships. 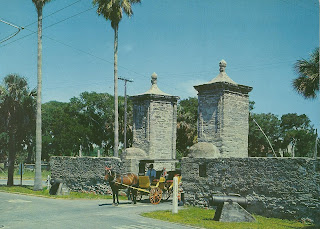 Old City Gates, St. Augustine, Florida.  the present City Gates were built about 1804, and were part of an older wall that surrounded the ancient city for protection.  the drawbridge leading to the gates was raised at sundown in the early days and late comers were forced to obtain special permission to enter. 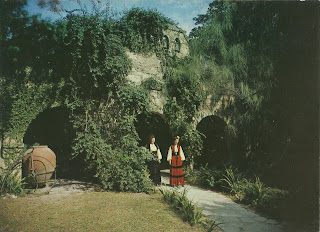 The Fountain of Youth in St. Augustine, Fla.  Juan Ponce de Leon landed in this vicinity on April 3, 1513, on his unsuccessful quest for the waters of eternal life.  the Fountain of Youth spring, surrounded by coquina walls, is preserved as a memorial to this famous Spanish explorer.  Visitors are conducted on guided tours from the spring to the ancient Indian burial grounds.
Posted by Brian at 4:50 AM